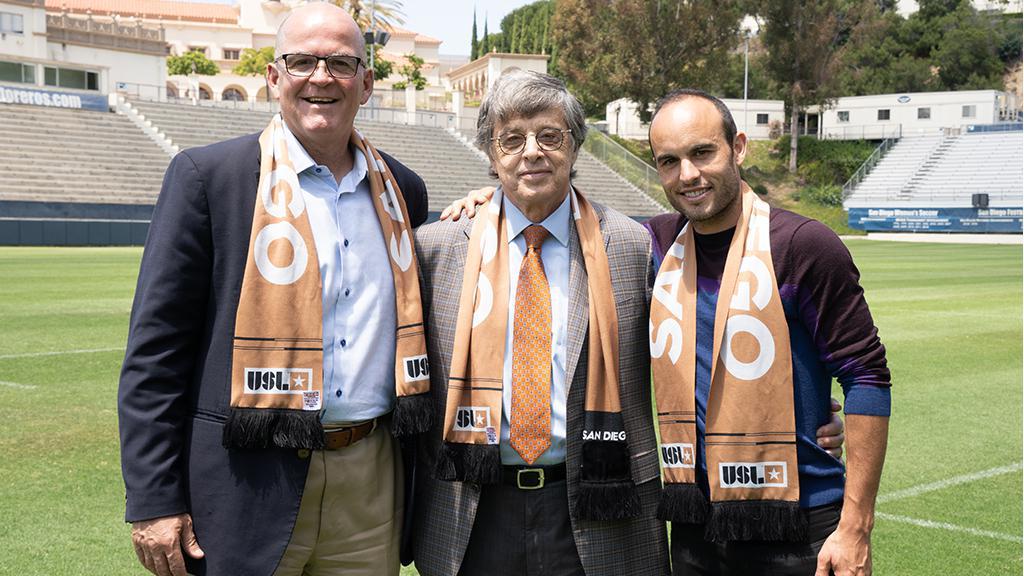 San Diego, Calif. – The United Soccer League (USL) announced today it has awarded a USL Championship franchise in San Diego to Sacramento Republic FC Co-Founder and former President, Warren Smith. The team has entered into an agreement with the University of San Diego (USD) to play at the University’s Torero Stadium and has named legendary former U.S. Men’s National Team player Landon Donovan as its Executive Vice President for Soccer Operations.

“We are delighted to bring USL Championship soccer to San Diego,” said USL Chief Executive Officer Alec Papadakis. “It is a proud community with a rich soccer history, and we have no doubt that Warren Smith – a man of great experience and character – will lead this club successfully into the future.”

Smith led Republic FC from its launch in December to 2012, to its entry to the League in the 2014 season and captured worldwide attention for breaking USL regular-season attendance and club revenues records as it claimed the USL Cup in its inaugural season. Republic FC continues to be a leader in USL Championship, recording sellout crowds during the 2019 season while having reached the USL Cup Playoffs in each of its five seasons in the league.

“I am thrilled to play a significant role in the massive growth of the USL Championship and to bring this fantastic League to the people of San Diego,” said Smith. “San Diego has long been a place that celebrated the beautiful game and demonstrated its passion for soccer both in those that play and watch. What it hasn’t had, and now will, is a club to call its own. I look forward to becoming the steward of building this club with the community and to seeing what we can accomplish together.”

Smith is joined by U.S. Men’s National Team legend Landon Donovan in the club’s front office following his appointment as Executive Vice President for Soccer Operations. In his new role, Donovan will oversee operations and will influence the club’s style of play, manage player identification and acquisition and oversee on-field performance. A four-time U.S. Soccer Athlete of the Year, Donovan made 157 appearances for the U.S. Men’s National Team, scoring 57 goals for his country, while enjoying a successful club career in Major League Soccer, the Bundesliga, the Premier League, and Liga MX.

“To have a world-class professional like Landon, who has also embraced San Diego as his home, represent the community and help us build this product, is incredibly exciting,” said Smith. “His experience as a player and his passion for the game is a perfect fit for the community of San Diego.”

“I chose San Diego as my home and have personally been focused on bringing professional soccer to the community,” said Donovan. “Thanks to Warren, USL and our incredible team, that dream has become a reality. I am ecstatic to be a part of this talented group and the newest addition to the USL Championship. I’m looking forward to our Opening Night in Torero Stadium and the stands being filled with smiles, chants, and cheers from my fellow residents of America’s Finest City.”

The club also announced today that it has entered into a three-year agreement with USD to play its home matches on campus at the University’s Torero Stadium.

“Torero Stadium is the finest soccer facility in the region,” said Smith. “It’s centrally located and has an Athletic Director who understands the value professional soccer brings to this community. USD has put on countless events over the years, including hosting NCAA and international matches. They will make for a terrific partner.”

“We are thrilled to have the opportunity to host the United Soccer League at Torero Stadium and to provide one of the most important elements of the League’s successful launch in San Diego – a great location for play. We’ve hosted a numerous international, professional, NCAA and amateur matches on our pitch, and this is certainly one of the most exciting efforts USD will be a part of,” said Bill McGillis University of San Diego’s Athletic Director.

In the immediate future, Smith and his team will be leading an extensive community outreach campaign to get local feedback on everything from the club’s name and crest, to start date and core values. The club will be set to compete in 2021, with the possibility to begin play as soon as 2020. For current updates, you can follow the club on Twitter, Instagram, and Facebook @USLSanDiego, or visit the club website at USLSanDiego.com

Through The Championship’s headquarters in Tampa, Florida, the league’s clubs are provided with unparalleled support with a growing team of more than 50 professionals across 17 departments, ranging from operations to marketing, communications, and sponsorship.

The Championship has a national media partnership with ESPN, wherein all league matches are broadcast on ESPN+, ESPN3 and across linear channels. The league also operates USL Productions, which includes a state-of-the-art facility that produced and distributed more than 500 league matches and more than 1,000 hours of original content to national partners, local affiliates and international markets throughout the 2018 season.