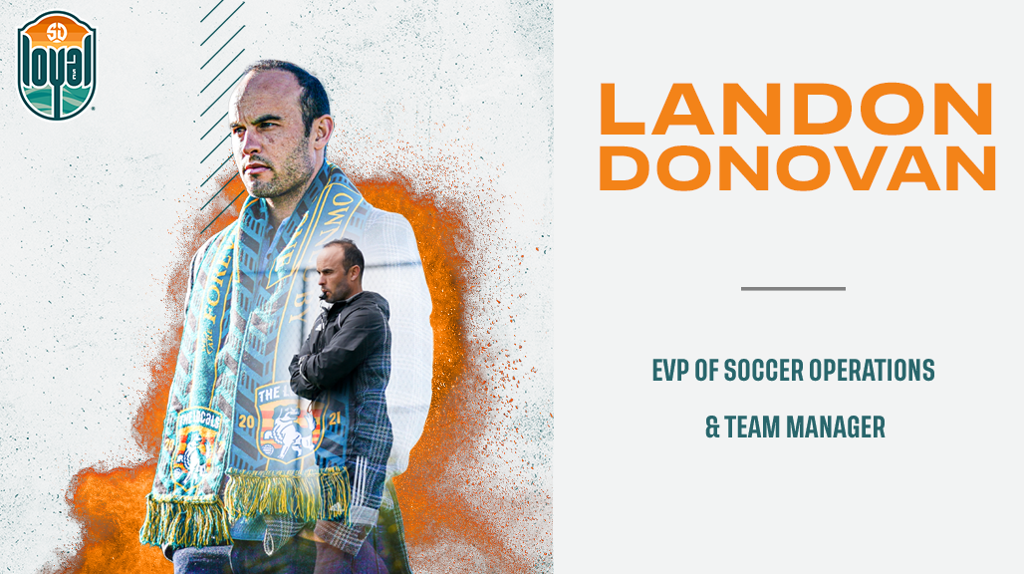 San Diego, Calif. (Jan. 13, 2022) - San Diego Loyal SC (SD Loyal) announced today it has reached a contract extension with Landon Donovan to remain the team’s manager and Executive Vice President of Soccer Operations. The move keeps the club’s technical staff intact as the team heads into its third season in the USL Championship.

“I’m thrilled to continue what we started in 2019,” said EVP of Soccer Operations and Team Manager Landon Donovan. “Whether it’s our players, front office or coaching staff, this club is committed to growing loyalty within our community and winning on and off the field. I’m grateful for this opportunity and won’t be satisfied until we bring a trophy home to San Diego.”

Donovan has been an integral part of the club’s leadership and operations since launching in 2019 and ultimately was named head coach before the inaugural season in 2020. He went on to lead his team to a 6-5-5 record with 23 points during a condensed season due to the COVID-19 pandemic. Donovan led SD Loyal to its first playoff appearance in 2021 with a 14-12-6 record and 48 points, finishing third in the Pacific Division in the club’s first full season. Donovan has also been key in bringing in the handful of impact players on the roster the last two seasons and during this offseason period heading into the 2022 campaign.

“Landon has embodied what it means to be loyal,” said SD Loyal Chairman Andrew Vassiliadis. “We’re excited to have him continue to head our soccer operations. Under Landon’s leadership, the sky’s the limit for what can accomplish in 2022 and beyond.”

Regarded as one of the greatest U.S. soccer players in history, Landon Donovan brings his extensive knowledge of the game to SD Loyal’s technical staff.

Donovan’s coaching staff also remains. Nate Miller will continue as Associate Head Coach, Tim Daniels as Assistant Coach and Matt Hall as Assistant Coach/Goalkeepers Coach. Donovan and his staff are preparing for the start of preseason camp later this month and five preseason matches starting in February before the season opener March 12 against LA Galaxy II at Torero Stadium at USD.

2022 Season Ticket Memberships and Group Tickets are on sale now. Seats can be purchased by calling (858) 465-GOAL or by visiting sdloyal.com/tickets.