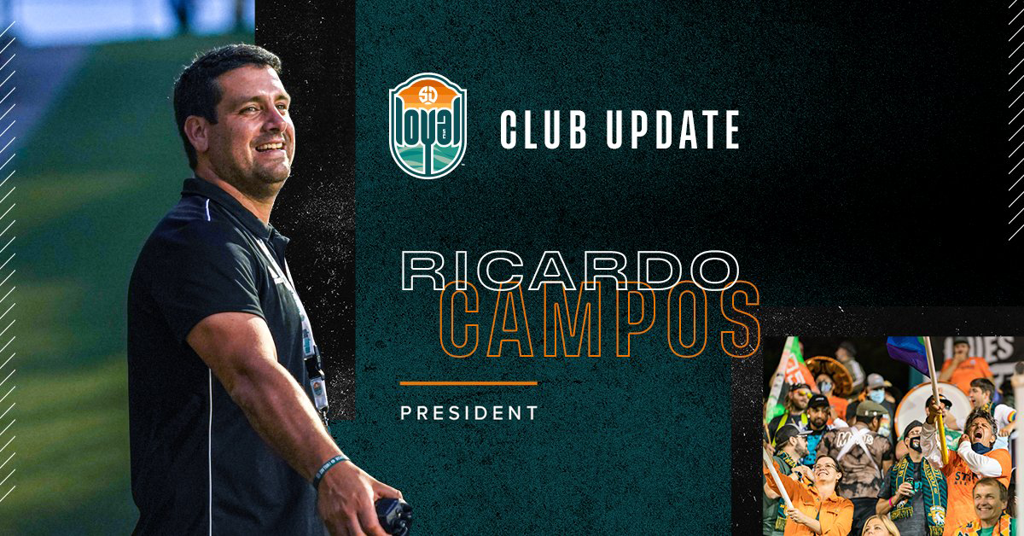 San Diego, CA (Jan. 7, 2022) - Today,  San Diego Loyal SC officially announced the appointment of Ricardo Campos as the club’s president following his work as the interim president during the 2021 season. Campos had served as interim president since July 2021.

“Since day one, there hasn’t been anyone more committed to this club and organization than Ricardo,” said SD Loyal Chairman Andrew Vassiliadis. “As we continue to grow loyalty within our organization and our community, there’s no better individual to lead us in that effort than Ricardo Campos.”

Campos is a tri-lingual soccer executive with more than fifteen years of league and team experience in the U.S. soccer landscape and has been involved with the club since it was founded in 2019. He served as SD Loyal’s Vice President of Operations and General Manager prior being appointed interim president ahead of the club’s first USL Championship playoff appearance.

In addition, Campos served as Technical Director of MLS-side New York Red Bulls for over six years prior to coming to SD Loyal. Campos will continue to oversee all of the club's business operations.

“I want to thank Chairman Andrew Vassiliadis for this tremendous opportunity,” said SD Loyal President Ricardo Campos. “There’s no place I’d rather be than with this club and community. I’m excited to help continue our mission as we look to reach new heights on and off the field in 2022.”

SD Loyal is preparing for its 2022 season which begins at home on Saturday, March 12 at Torero Stadium against LA Galaxy II at 7:00 p.m.